BONOMI INDUSTRIES SRL manufactures a variety of pipe threads, American and international, male and female, long and short. To understand the differences, and to help you answer customer questions or inquiries for unfamiliar pipe threads, the following “quick course” is offered.

NPT (National Pipethread - Tapered) (ANSI B1.20.1)
Standard fluid sealing thread. Normally both the male and female threads are tapered at the rate of 16:1. A sealant like pipe dope or teflon tape is needed to assure gas tightness. Thread flanks are 60 o and are flatted at the crest and root. 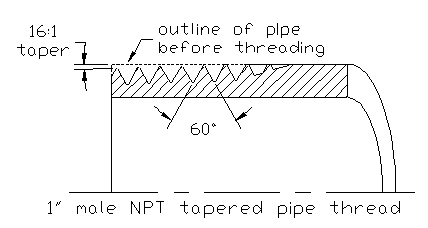 NPTF (“Dryseal”) - Same as NPT except the crests and roots are made to interfere, and tolerances are tighter so that the thread can seal metal-to-metal with no dope or teflon tape. When the parts are wrenched together the interfering metal squeezes and distorts to fill the gaps and make a seal. NPTF can be mated with NPT but the joint may require sealant to be bubble tight. NPTF Short is also made, (see Short below) but not very popular.

Special concern for Dryseal threads in stainless
Series 300 stainless steel (like our s.130) has a tendency to “gall.” (i.e. If male and female parts are both stainless, and they are forcefully threaded together they can weld to each other and be impossible to disassemble.) For that reason stainless parts should not be assembled dry, even if they both have “dryseal” threads. Teflon tape or an anti-galling compound should be used.

NPT SAE short - Same as NPT except one thread shorter to save material.
NH – Hose coupling threads (like a sillcock for a garden hose). They are straight, not tapered, because the seal is with a hose washer, not the threads. The thread form is the same as NPT, but the pitch (number of threads/inch) is coarser than NPT in the 1/2, 5/8, and 3/4" sizes.
NHR – Same as NH except the form is more curved to allow production by Roll forming. Familiar on the rolled threads made of thin metal on garden hose.
NPSH – A slightly looser fitting NH, meant to join with an NPT tapered thread, but to seal on a washer.
NPSC – Female threads only. Same as NPT except straight, not tapered. Used for non-pressure-tight applications like pipe scaffolding or pipe railings.
NPSF – Female threads only. Same as NPTF, except straight, not tapered.
NPSI – Same as NPSF but slightly larger. Used with brittle or thick walled materials, not brass.
NFPA “xxNH” (National Fire Protection Association – National Hose) – A coarse straight thread used for fire plugs, hoses, etc. Unfortunately they use the same letters (NH) as the ANSI NH thread mentioned above, but the threads are not the same and not compatible. The saving feature is that ANSI puts the NH at the beginning of the designation, and NFPA puts it at the end, after the size, which is shown above as “xx”.

There are many pipe thread specs issued by various countries, but these are now being merged because of the ISO (International Standards Organization) and also because of the European Union which is trying to eliminate national specs, in order to encourage international trade. The commonest specs are:
British specs (BS 21 and BS 2779),
German specs (DIN 259 and 2999),
European specs (EN10226), and
ISO specs (ISO 7 and ISO 228).

BSPT (British Standard Pipethread – Tapered) British equivalent to NPT. Uses the same taper angle (16:1) and on some sizes, the same pitch, but all sizes are incompatible with NPT because of the Whitworth thread form (see chart below).

BSPP (British Standard Pipethread – Parallel) Same as BSPT except the thread has no taper. If male and female are both parallel, there will be no fluid seal. (Not useful in plumbing of course, but it is used on mechanical joints, like pipe staging structures or railings.) But a tapered male can be assembled into a parallel female and seal OK for moderate pressures. If the female is soft and ductile (like brass) it will distort enough to seal on the last 1.5 threads.

Warning – Some Americans speak loosely of all international pipe threads as “BSP” or “metric.” Although all popular non-NPT threads use the British Whitworth thread form, they are not all BSP. When ordering be sure to state the exact spec which is required (“BSPT” or “DIN2999-1” etc.). 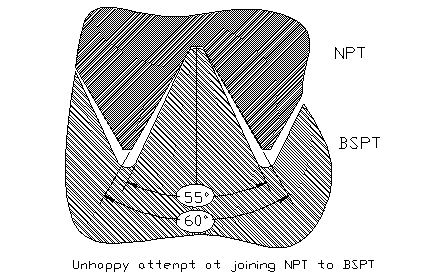 Notice the different flank angles of NPT and BSPT, and also the rounded Whit-worth form compared to the flat roots and crests of the American thread. As you can see from the drawing, there is plenty of room here for a spiral leak.

To be sure a pipe thread is correct it can be examined on an optical comparator (a precise shadow graph projector). This is easy on a male thread, but to see a female the part must be cut in half. To avoid cutting, there are a family of precise hardened steel gages which can be screwed into a female pipe thread to check the 16:1 taper, the heights of the flats on the top and bottom of the thread form, the shape of the thread form, and the length of perfect threads. Of these the most common is a threaded plug which is hand tightened (no fair wrenching the gage!) into the female thread. There are notches on the plug, showing how far into the female it should go. Either too deep or too shallow a penetration is cause for rejection.

Since BONOMI INDUSTRIES SRL makes both American and International threads, which look similar but are not compatible, it is important to have a visual code to identify which is which. All BONOMI INDUSTRIES SRL female threads have a small indicator shape at the mouth of the thread as follows. 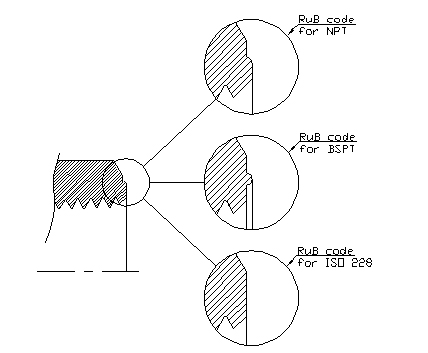 Note – The letter G is used to indicate BSPP (or ISO 228) pipe threads. The nominal size is then stated in inches (!). Thus G 1/2 is a BSPP female thread of similar size to 1/2 NPT. But as stated below, a G 1/2 female will screw together with 1/2 NPT pipe, but will not seal pressure.