Introduction and Conclusion
As the natural gas distribution industry switches from the traditional iron plug valves to brass ball valves some gas utilities have expressed concern that the brass valves will cause galvanic corrosion of the steel pipes to which they are attached. The following is a review of the technical data on that subject. Also included is a statement from Entela, a consulting firm, and a report of accelerated salt spray tests run by a manufacturer of gas service systems. The conclusion is that brass valves joined to steel pipes will resist corrosion better than iron valves because, in spite of the larger galvanic voltage which is created by the brass/steel interface, compared to the voltage created by an iron/steel interface, the other factors which affect corrosion far outweigh this difference. The photos attached make this dramatically clear.

Background
In order to address this statement, one must realize that quite often the terms electrolysis and galvanic corrosion get intermixed. Both terms describe a type of corrosion occurring between two dissimilar metals, with the corrosion taking place at the anode.
However, it should be noted that with electrolysis, an outside electrical current (such as a stray current originating from a nearby DC welding machine, a series of batteries, etc.) is applied to cause the corrosion. Thus in our case we will be referring to galvanic corrosion because we are assuming that an outside current is not supplied to our system.
Galvanic corrosion occurs when dissimilar metals are in contact with one another in a liquid (electrolyte) wherein on metal becomes an anode and corrodes, while the other act as a cathode. In order to predict which metal is the anode or cathode and which metals are relatively safe to use in contact with one another, a galvanic series table can be used.
The factors influencing galvanic effect:

Galvanic Corrosion
If an electric current passes out of a metal object into an electrolyte, the metal will suffer a corrosive attack in that area. No damage is caused by current flowing into metals from electrolytes. But outflow can cause damage.

There are two common sources of such electric current

The severity of this attack depends on several variables

The Galvanic Scale
Every metal has a natural ability to create voltage. Different metals have different voltage potentials, and they can be compared by testing different combinations of metals in the presence of an electrolyte. This ranking is called the Galvanic Scale, which is shown below. Voltage potentials for the various metals are shown for three different electrolytes, Standard Hydrogen, Saturated Copper Sulfate in water, or Saturated Calomel. The voltages are different for each electrolyte, and would differ also for other electrolytes, but the ranking of the different metals would be the same for all electrolytes. The left side of the chart is called “active” or “anodic.”
The right side is called “noble” or “cathodic.” If two metals – say brass and steel – were in contact a voltage would be created equal to the difference between their positions on the scale, and, since it is further to the right on the scale, the steel would be he anode in that pair and would be attacked. 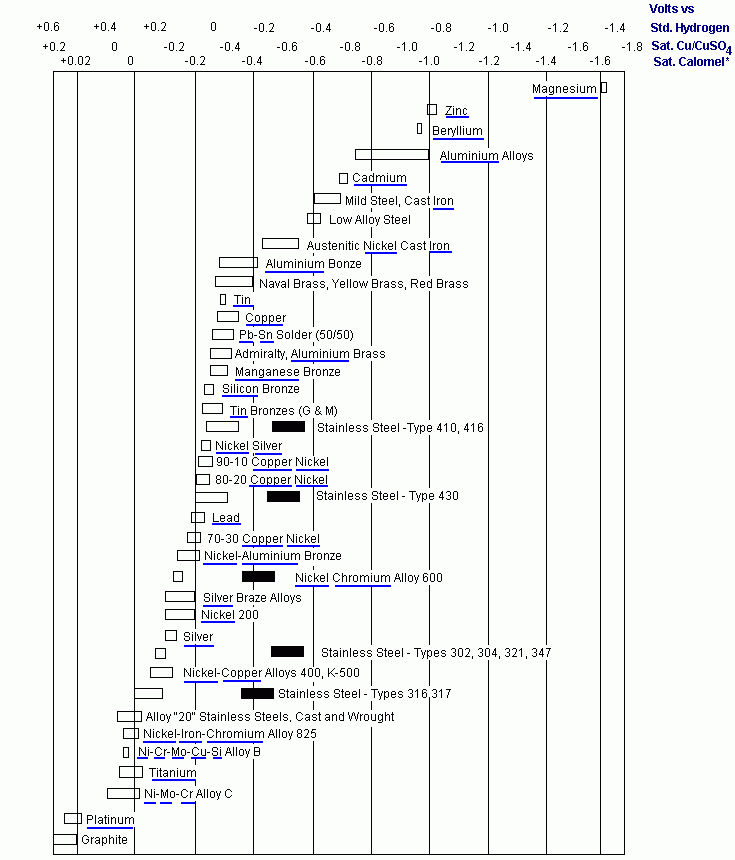 Using the calomel voltages above, mild steels and cast irons all fall in the range of -.6 to -.69 volts. Steel used in pipe might be at the less negative end – say -.61. The different brasses have various voltages ranging from -.27 to -.40 volts. If C37700 brass (used in Bonomi Industries Srl) falls in the middle of that range it would have a voltage of about -.34 volts. The difference between the steel pipe and the brass valve would be -.61 vs. -.34, or .27 volts, while the difference for the steel pipe and the iron valve would be only -.61 vs. -.69 or .08 volts. That is why the utilities are fearful that brass valves will create more corrosion of the steel pipes than the iron valves they have used in the past. But notice that in the steel/brass pair the valve is the cathode, and will not corrode, but in the steel/iron pair the valve
is the anode. This is a serious difference because of the area effect, which see below. With a brass valve the steel pipe will suffer a very slow and harmless attack, but with an iron valve the corrosion will attack the valve rapidly. These theoretical expectations are supported by the corrosion tests done at Customer. (Please see the pictures below.)

The severity of corrosive attack depends on several factors – not on galvanic voltage potential only.
Area Effect
The thing which causes damage is the current density flowing out of an anode. That depends on the voltage difference, but also on the area difference. In the case of a brass valve screwed onto a steel pipe, the metal-to-metal boundary which produces the current is only the surface area of the pipe threads where the two metals touch. But the area where the current leaves the pipe is much greater, depending on the length of the pipe and how much of the pipe is in wet ground or otherwise touching an electrolyte. (Please refer to this area effect in the Entela Report attached.) Therefor the current generated is small and the area from which it leaves the pipe is large. Current density along the pipe would be low, and minimal corrosion would occur. Conversely, with the iron valve, the valve will be the anode, and flow from it will be concentrated because of the smaller surface area of the valve compared to the pipe. The valve will be attacked rapidly. (Please see the photos in the Customer test report attached.)

Time Factor
A second variable is the length of time that the current flows. In above ground situations (like outdoor meter sets) there is no electrolyte in contact with the pipe and valve except when it rains, or when there is dew or splashed water contacting both parts.

Protective Coatings
Another important factor is paint or other coatings applied to the parts. Paint can sharply reduce or eliminate the surface area which is in electrical contact with the electrolyte. Without a complete circuit there will be no galvanic attack. But paint can also be harmful. If there are small defects in the coating (like wrench marks on a pipe, or partial threads cut by a thread dye and not then recoated) the corrosive attack can be concentrated at the small defect, and the paint will undermined at that point and produce rapid local corrosion.

Salt Spray Tests
Three sample valve/pipe assemblies were tested by Customer in their salt spray test booth. The samples were:

All three samples had painted steel pipe nipples installed. The paint covered most of the surface of the nipples, but a small area of unpainted steel was exposed in the threads near the valves.

The report with photographs of these parts is attached.
The corrosion of the painted pipes with brass valves was accelerated by the paint, as described above. Both brass valves also showed minimal corrosion, as would be expected since the brass was the cathode in the test. Most importantly, the pipes joined to brass valves showed no more corrosion those joined to iron valves. In spite of the greater galvanic voltage created by the brass/steel junctions the only serious corrosion revealed in the tests was of the iron, because the iron valve, was the anode in that pair.

Non-Galvanic Corrosion
Not all corrosion is galvanic. Iron which is exposed to the weather, or worse, immersed in salt water, will rust, even though there is no second metal involved. The bigger (that is, less negative) voltage of brass compared to iron makes brass a more potent voltage source in a galvanic pair, but that same bigger voltage also makes brass less likely to corrode when it is exposed to weather. As can be seen from the Customer photos, the worst corrosion by far was of
the iron valve, not the pipes screwed into the brass valves. Brass is widely used for its superior resistance to non-galvanic corrosion, and many millions of brass valves are joined to steel pipes in many different services around the world, but they suffer no damage, either from galvanic or non-galvanic corrosion. Bonomi Industries Srl has about 25 million brass valves in the field attached to steel pipes, and has not had any case of corrosive failure due to galvanic attack.

Glossary of Terms
Anode – The metal in a galvanic pair which has the lower voltage potential, and therefore suffers from outflow of electrons to the electrolyte.
Cathode – The metal in a galvanic pair which has the higher voltage potential. It is not damaged because the electron flow is into, not out of, the metal.
Electrolyte – a liquid capable of carrying an electric current. Pure water is an insulator, and will not carry current, but if there are ions in the water (from the presence of salts) it will easily conduct electricity. The pH factor of water indicates how acidic or basic it is, and therefore how easily it will conduct electricity. Either high or low pH makes the water more conductive. Pure water has neutral pH (6.0) and is non-conductive.

Galvanic Cell – A galvanic pair which also has present an electrolyte to complete the electric circuit and allow current to flow.
Galvanic Corrosion – Corrosion which occurs at more chemically active of two metals that are electrically coupled and exposed to an electrolyte (the anode of a Galvanic Cell)
Galvanic Pair – Any pair of metals which have different voltage potentials and are in electrical contact with each other.
Galvanic Series – A ranking of metals and alloys as to their relative electrochemical reactivity in seawater

Corrosion and the Maintenance Engineer
Wilson and Oates
Hart Publishing 1968